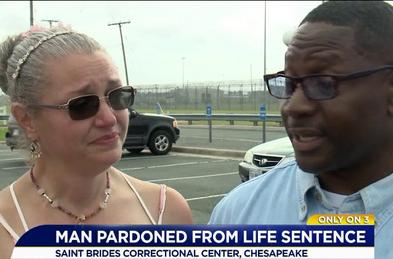 ​​To secure Mr. Coggeshall and his team for a pardon petition, the first step is to obtain a phone interview to determine if Mr. Coggeshall will take your case.

Phone interviews with Mr. Coggeshall are $300.

Do not send transcripts, court documents, or anything else via email or regular mail until Mr. Coggeshall has agreed to take your case.

Governors of every state in the United States, after an inmate pardon petition is received, usually wait one-to-four years (or longer) to decide whether or not to pardon the inmate.

The second pardon John Coggeshall ever filed for an inmate was granted by a Governor ten days after it was submitted. That pardon reduced the inmate’s sentence from six consecutive life terms (plus 118 years) to 40 years.

On his last day in office (January, 2018) another Governor granted pardons to only six inmates. Three of those pardon petitions were written and submitted by John Coggeshall.

And Mr. Coggeshall may be one of the few pardon preparers to ever receive two different pardons from two different Governors for the same client.

Attorney Coggeshall is not only making a difference in the lives of individuals, he is changing the criminal justice system in powerful and meaningful ways.

Attorney Coggeshall worked tirelessly for a decade and a half to lower Travion Blount’s sentence of 6 consecutive life terms plus 118 years: Blount (following two adults) had raided a house party, taken $75 dollars, three joints and two cell phones while physically hurting no one).   Travion was just 15 years old when he was arrested.  Today, Travion is a free man.  The recent pardon of Travion Blount is a win for all juvenile justice reform.  As a direct result of Travion’s cruel, unusual and wholly unconstitutional punishment, two new laws will go into effect on July 1, 2020.

Virginia Governor Northam recently signed House Bill 35, “a landmark piece of legislation that gives an opportunity for youths who have committed serious crimes and repented a future opportunity for social redemption.” It provides, “that any person sentenced to a term of life imprisonment…while that person was a juvenile, and who has served at least 20 years of such sentence … shall be eligible for parole.”

In addition, Senate Bill 546 will increase the age when a juvenile can be tried as an adult.  Under this new law, fewer 14 and 15-year-old juveniles will be tried as adults. Prosecutors will no longer have complete discretion to certify 14 and 15-year-olds as adults for various felonies. A juvenile court judge, after hearing evidence, will now have the final authority to certify teenagers (under the age of 16) as adults to be tried in adult court.

Freedom for Travion Blount is a win for us all.

Not long ago, a juvenile girl involved in a street gang murder testified against eight gang members, and prepared to testify against four others. All twelve were found guilty, and most are currently serving life sentences or a term of years nearly equivalent to life. That girl was released after five years, and relocated to a safe zone. Her attorney from the beginning to today (they became friends and stay in touch) was John Coggeshall.

The legal profession, media, the internet and the public at large have taken notice of Mr. Coggeshall’s many successful clemency endeavors—the prince of pardons, the king of clemency, the mean street law reader who studied like Lincoln—all affectionate/honorary titles given to “Cog” as a preparer of inmate pardon petitions.

Coggeshall now offers his pardon petition knowledge and expertise to residents of every state and Commonwealth in the United States. Follow his endeavors on Twitter, Facebook, his informative website (www.johnacoggeshall.com), various radio/TV interviews, podcasts, broadcasts, videos and multiple other media appearances.

Retain John Coggeshall to prepare your pardon and you may be communicating one-on-one with national researchers, reporters, celebrities, educators, multiple legal advocates and, probably most important, actual recipients of Governor pardons that were written and submitted by Mr. Coggeshall, who have now been released from lifetimes of incarceration and want to help other deserving inmates (and their families) obtain justice and freedom. The Cog Team is primed and ready to take your pardon petition (or the petition of an imprisoned loved one) down the field, around the bases and through the hoops to success!

Exhausted all appeals in state and federal court?

Coggeshall—the name may set you free.

Be advised that the choice of a lawyer is an important decision. We encourage any interested party to contact counsel of their choosing. John Coggeshall is an attorney licensed to practice law in the Commonwealth of Virginia. Mr. Coggeshall makes every attempt to comply with all legal and ethical requirements. Mr. Coggeshall has the ability to file pardons in any state or Commonwealth in the United States as an agent/representative authorized by the petitioner and in association with (and under the supervision of) an attorney licensed in your state or Commonwealth. Prior results cannot and do not guarantee or predict a similar outcome with respect to any future matter, including yours, in which a lawyer or law firm may be retained. Each pardon petition offers its own merits and issues. All pardon petition inquiries are carefully screened and selected.

Terms of Use may be modified by the firm
The information provided herein is not intended to be legal advice, but merely conveys general information related to certain legal issues. The www.johnacoggeshall.com website periodically changes, adds, or updates material without notice.  No liability or responsibility for any errors or omissions in the content of this website is assumed. Under no circumstances shall www.johnacoggeshall.com, or any other party involved in the creation, production or delivery of this website be liable to you or any other person for any indirect, special, incidental, or consequential damages of any kind arising from your access to, or use of, this website or any of the information on this website.